PRODUCE GREAT VIDEOS WITH YOUR SMARTPHONE 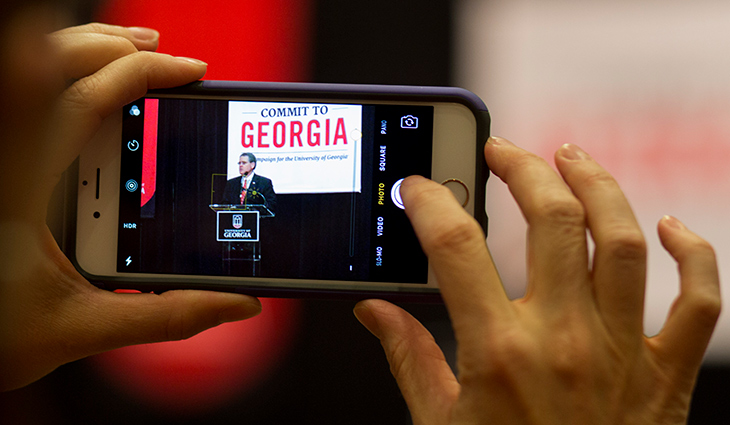 A primer on the basics of smartphone video production

Creating videos with your smartphone isn’t about perfection. This isn’t a Hollywood studio level production. In fact, for most of the platforms you’ll be targeting (social media) too high of a production quality can come across as unauthentic. What you’re going for is a competently produced video that covers the basics of good technique. Namely, decent quality audio and video, interesting, informative, and authentic content, and a reasonable length.

Creating compelling video starts with picking the right “canvas”. Choose an area with a background that is aesthetically pleasing without being distracting. Make sure the background isn’t too busy and that there will be a good contrast between the subject and the background. Ensure that you have a good degree of control over the space or environment where you will be filming. Somewhere where you can rearrange furniture and lighting and can control noise is preferable. Finally, find a space where there will be little potential for being interrupted.

PRO TIP: Use your phone’s LCD as a “frame”. Pan it around a space to find the best possible composition for your subject and background, while keeping in mind the lighting as you do so. Once you’ve found the best frame, mark the spot and orientation so you can set up your scene.

While it may be tempting to film outside, be aware that, especially in urban areas, the outdoors are noisy. Vehicles and planes will go by regularly while you are filming and are unpredictable. You could be in the middle of the “perfect take” when your neighbor decides to start up her lawn mower. Even without cars, planes, and lawn mowers, there is a large amount of ever-present ambient noise outside that can overwhelm the microphone built into your smart phone.

PRO TIP: One way to mitigate ambient noise is to wear earbuds that have a built-in microphone instead of relying on your smartphone’s mic. Another technique is to use two phones. Use one phone to record video and set the second phone to record audio and put it in your subject’s shirt pocket. This way, you can get the best camera angle and the best possible audio simultaneously. The downside to this second technique though is that it requires post-production editing to sync up the audio and video from the two phones.

Since you don’t have access to studio lighting, take advantage of the natural light that windows provide in addition to whatever artificial lighting the space has. Note the strongest source of light in the space and use that to your advantage. In the best lighting scenarios, the subject will be evenly lit from the direction of the camera and both sides. Light coming from behind the subject will cause him/her to be silhouetted, which will put them in shadow and create problems with exposure and focus. Prevent backlighting by ensuring that you don’t have a window or bright light source directly behind the subject.

Pro TIP: If filming outdoors, be aware of the time of day and the weather. Noon on a clear day may seem like a good scenario, but in reality the intense sunlight creates harsh shadows on the subject’s face and will cause them to squint, while an overcast or cloudy day or shooting at dusk or dawn on a clear day can produce a softer, more even light.

Before taking video on your phone, make sure you’ve set it up properly. One important setting is video resolution. Most modern smartphones are capable of taking video in 1080 HD or even 4K resolutions. The higher the resolution, the sharper and more detailed the image. Aim for at least 720p or above.

Next, check the frame rate, which sets how many individual frames per second (fps) your video records. Common settings are 30 fps, 60 fps, and less commonly, 24 fps. The higher the number, the smoother-looking video you’ll produce. However, most video is shot at 30 fps and this will be sufficient for most people’s needs.

The steps for setting resolution and framerate vary depending on phone model and OS, but are generally easy to find in your camera app.

When choosing your resolution and frame rate it is important to understand how this affects the size of the media file that will be produced. The higher the frame rate and resolution, the bigger the file you will output. For instance, a five-second video shot at 4K-resolution will be roughly four times the size of the same video shot in 1080 HD resolution. Note the amount of space you have on your phone before you begin and take some test videos at different lengths and resolutions before starting your actual video to ensure that you will have enough space on your phone for the final video file.

PRO TIP: Before you shoot anything, clean your lens. When we’re not getting fingerprints all over them, a smartphone lives in your pocket with the lint and dust. A dirty lens can have a noticeable effect on the image quality of your video. Use a microfiber cloth or lens cleaning wipe if you have them, or gently wipe your lens with a damp paper towel before you start shooting.

Achieving Good Production Quality
Get Down to Business

The anatomy of a good video:

Perfect your delivery
Know your content and practice delivering it without having to think too much about it. Avoid unnecessary pauses and words like, “um”, “ah”, “like” etc.  While having a script can be helpful, you can come across as insincere if you sound too robotic in your delivery or like you’re reading from a page. It’s best to have a good outline of your talking points and practice delivering those “off the cuff” rather than writing out every word. Do as many takes as you need, but remember that perfection isn’t the goal. Your goal is interesting, informative, and authentic. Finally, time yourself to ensure that you can stay within the time constraints of the platform on which you’re posting.

Keep it short
There are multiple reasons why less is more with video:

Aschmidt. The Right Video Length for Each Platform. 2060Digital. No Date. https://2060digital.com/blog/right-video-length-platform/

Stan Jackson
Assistant to the Vice President for Communications, Data, and Technology
​ugastan@uga.edu