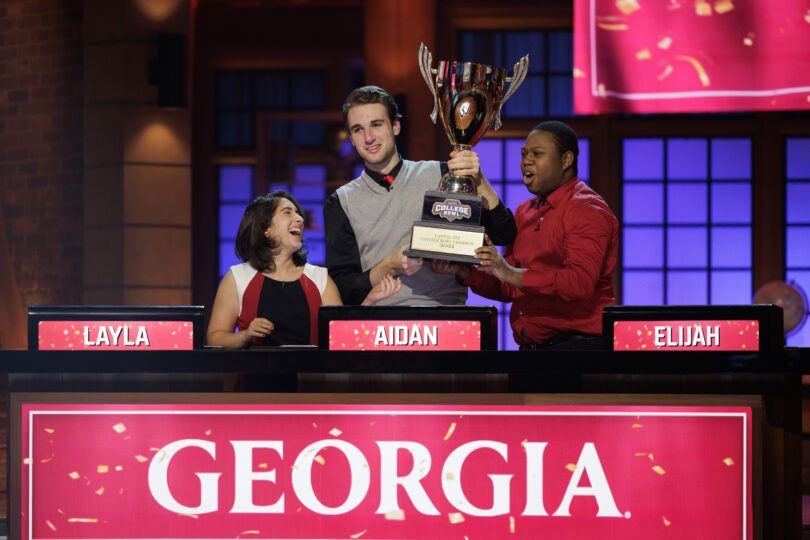 They each receive $125,000 in scholarship winnings

The University of Georgia is adding a new trophy to its case.

This victory was not only an accomplishment for their group, but also a chance to highlight the university’s academic prowess.

“I always wanted to go to a big school, and [by attending UGA], I’ve gotten really into the Athens art scene and music scene,” said Leahy, a Double Dawg student from Suwanee studying history and Portuguese and earning his Master of Public Administration. “[College Bowl] was a great opportunity to bring attention to UGA.”

Sixteen colleges from around the country competed in this year’s College Bowl, the show’s second season. Students auditioned individually, and while Leahy and Odunade are UGA Quiz Bowl members, Parsa joined the team with no formal quiz bowl experience.

“Once we got there, Layla fit right in,” said Odunade, a political science major from Norcross. “Aidan and I have a lot of overlap in knowledge, and Layla was perfect for the team—she has that STEM aspect of knowledge, and that’s not something we had a ton of background in.”

“And I remember the first day, I asked Aidan, ‘Since you guys know how this works and know some of these people, how far are we going to go?’” added Parsa, a mechanical engineering major and general business minor from Marietta. “He said, ‘We’re going to go all the way.’”

That confidence, and quick reflexes on the buzzer, led the team through several rounds of competition. The team took on Southeastern Conference rivals the University of Florida during the initial qualifying round, emerging victorious and advancing to defeat the University of Texas at Austin, Syracuse University, Penn State and then Columbia in the finals.

While the team embraced their strategy to win, they also enjoyed the camaraderie on set. Teams from different schools were able to talk between takes on set, and everyone remained supportive throughout the process.

“It was a really positive environment. Everyone was there to support each other,” said Leahy, who also served as team captain. “Several people in the competition were also people I knew before the show either through the national Quiz Bowl circuit or even high school quiz bowl.”

All students received a scholarship as the result of their participation, and UGA competitors said these funds help create a base for their future education and career success. Parsa plans to get her MBA and then follow in her father’s footsteps, earning a Ph.D.

“I want to go to graduate school, and that can sometimes be an expensive endeavor. This scholarship money opened a door,” Odunade said. “After this experience, I know I can do it, so I know I’m going to graduate school because of this show.”

“I definitely agree,” added Leahy. “I come from a lower income, single-parent household. I’m also very boring with money, so after I pay off my loans, the rest will go in savings. But this helps provide some much needed security, and hopefully a good start to my career when I leave UGA.”

In addition to the memories made during the College Bowl experience, the team agreed it was exciting to bring another national championship trophy to the University of Georgia. 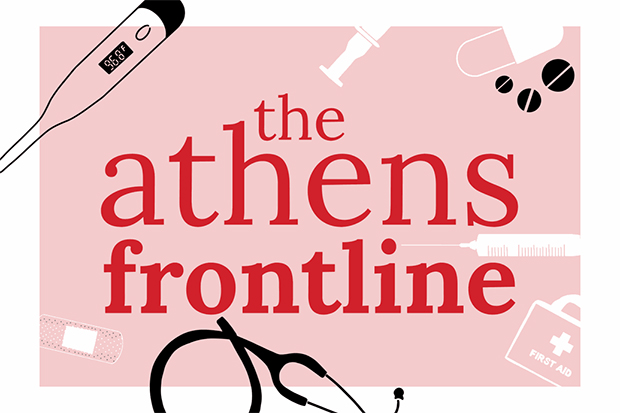 Listen to a podcast from The Red & Black dedicated to the discussion of health topics, tips, and news. Listen in on their conversation about how the pandemic has affected the mental health of college students, the issue of pandemic-induced eating disorders, and access to resources for students who are seeking mental health support. 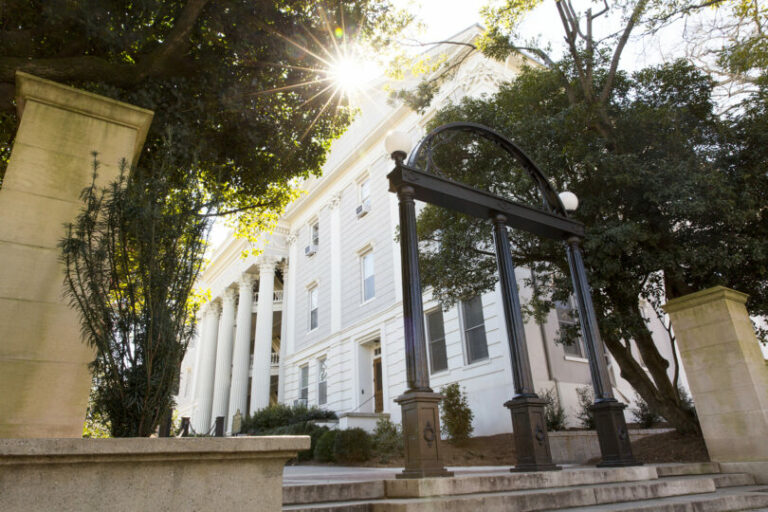 New USNWR ranking puts the University of Georgia at No. 16 in the nation 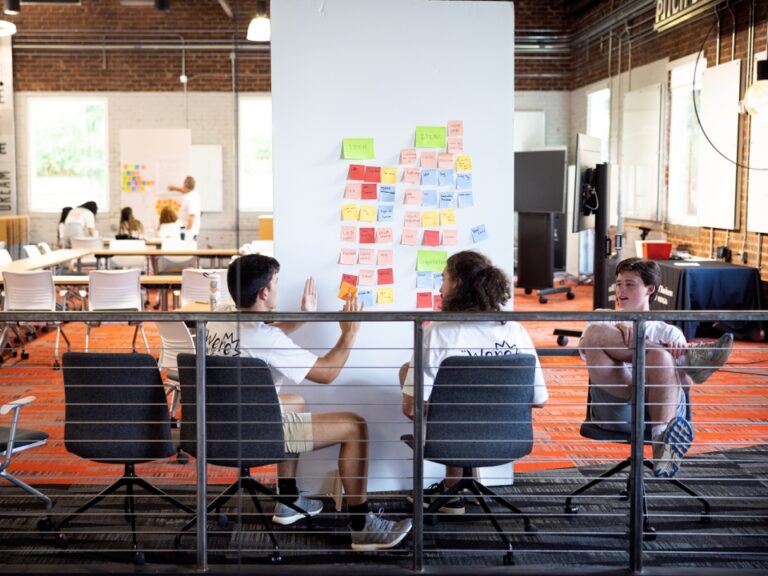 It’s July in Georgia. It’s hot. You have your dog in the car, but you want to run into the gas station to grab a bag of chips. What do you do? Dawg Camp Innovate students were up for the challenge. The incoming University of Georgia freshmen pitched a collapsible cooling fan that folds out… 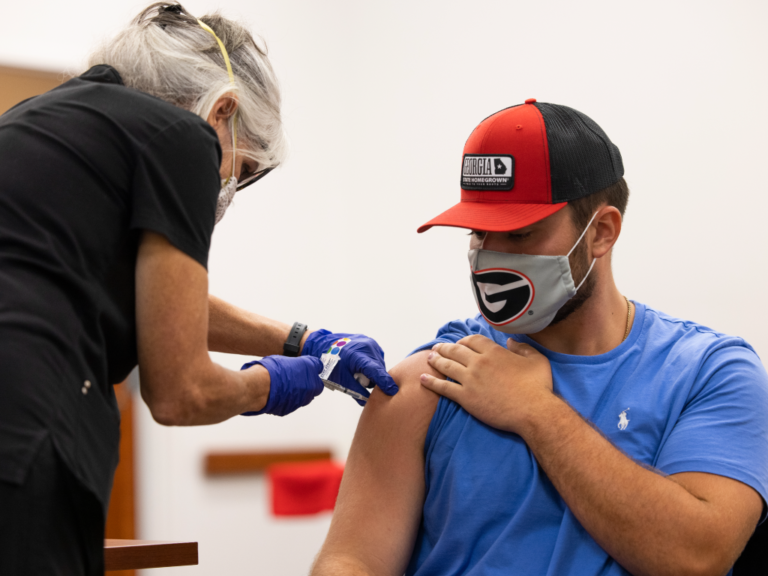 The University Health Center has received a limited number of bivalent Pfizer-BioNTech vaccine and will begin administration to scheduled appointments beginning Friday, September 9th. For information regarding eligibility and scheduling, please read more. 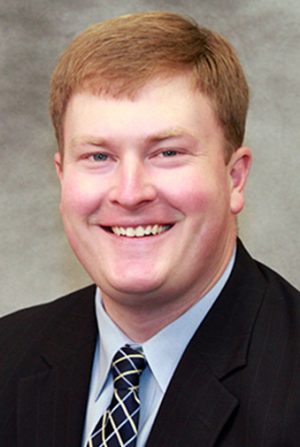 Beau Seagraves, currently associate dean of students at the University of Georgia, has been named the university’s associate vice president for student well-being. The newly created position within the Division of Student Affairs will lead efforts to enhance campus-wide mental health and well-being resources. The Well-being Resources initiative aims to help students become more active,…

Our campus community becomes safer and stronger with every person who is vaccinated against COVID-19.