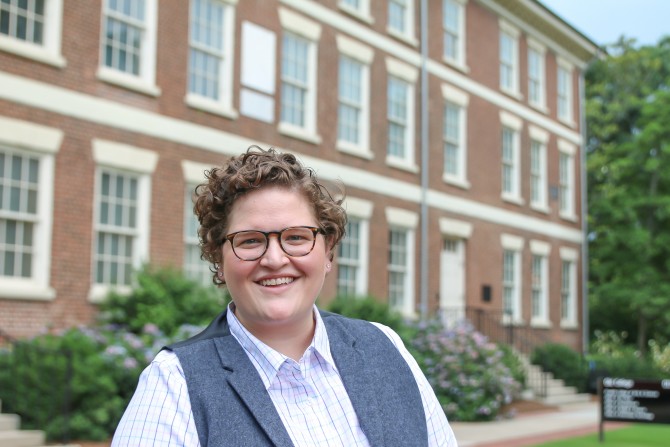 If I had one word to describe how I feel about working at the University of Georgia, I’d say … grateful. Grateful for the chance to grow while helping provide others the space to do the same.

Taylor has been a staff member in UGA Student Affairs since 2013. Prior to joining us, she completed her bachelor’s and master’s degrees at the University of South Carolina. While there, she majored in history and was an involved student leader within Student Government Association, University Housing, and more. Taylor grew up in Gaston, SC, just outside of Columbia.  When you add together being born and raised in South Carolina and attending the state’s flagship institution, you would think that Taylor might have a bit of a tough time becoming a Bulldog. That hasn’t been the case, though.

“Athens and UGA were quick to feel like home for me. At first, I was surprised, but I shouldn’t have been. When you take the charm that this town has and combine it with an institution that provides the opportunity to work with some impressive folks, you’re bound to fall in love.”

As with all Staff Spotlight interviews, the person being interviewed picks their favorite spot on campus to have their interview. Taylor chose Old College as her favorite place on campus. “I felt like picking Tate [Student Center] since it’s where I get to see our work come to life, but the story I was told by an Arch Society Member about Old College has me entranced by it. He said that in the early history of the University, they chose to build Old College so that both the north and south sides of the building presented as if they were the ’front of the building.’ They wanted it to be adaptable for whichever direction the University developed. That story stuck with me. I guess you could say such a tale has helped me grow as a person and professional.” She added, “I think it’s important for us as student affairs professionals to be adaptable to whatever direction our students go. Being able to recognize that we as leaders are ’not finished‘ and that in order for us to be our best–for the best students in the country–we need to be able to say ‘We’re here. We’re ready to help you. Tell us where we are going.’ and help them accomplish their dreams. ”

When asked what made her fall in love with UGA, she said, “It’s the people that work here and their care for one another. It’s the students and the impact their passions have on their community and the surrounding state. When you’re helping a student, it’s more than just a one-on-one or a big concert– you’re helping them learn and grow as they create a life here, if only for a few years, so they might go on to make a difference in the lives of others. That’s pretty incredible when you think about it. ”

“The coolest thing I’ve ever done, without a doubt, is marrying my wife. Plain and simple. That might be cliché but it’s the truth. It’s not every day that you get to marry the woman of your dreams.”

Nominate someone to be recognized for their hard work!